THANK YOU SO MUCH for the incredible show of solidarity for Haitian garment workers and their fight for 800 Gourdes minimum wage!

Organizers in Haiti say that your emails, tweets, calls and donations are making waves. Factory owners, the government, and corporations know that the world is watching. Mainstream media is also starting to wake up to this story, and the RRN is receiving requests for information about the story.

On May Day – May 1st – PLASIT-BO, a coalition of textile unions affiliated with Batay Ouvriye, announced the demand for a minimum wage adjustment of 800 Gourdes/8 hour work day (US $12.60). Since May 19th, garment workers in four cities across Haiti have been striking and demonstrating for this wage.

After weeks of strikes and mobilizations, the workers are now regrouping. Many have been arrested. Some must return to work in order to eat. Some have been denied entry into the factories for their participation in the strikes.

Please consider making a donation to help workers continue their efforts. Your contribution will be used to provide meals to workers at meetings; to print leaflets; to help transport organizers; and to recoup the costs of mobilizing in four locations for a month.

*Dates reflect when the RRN received the media.

Workers in the SONAPI Industrial Park in Port Au Prince mobilize during their lunch break, chanting for 800 Gourdes!

Workers demonstrate outside the jail in Port Au Prince, demanding justice and the release of workers, arrested for their participation in the strikes and protests.

Photo outside the Port Au Prince jail, where some workers are released. 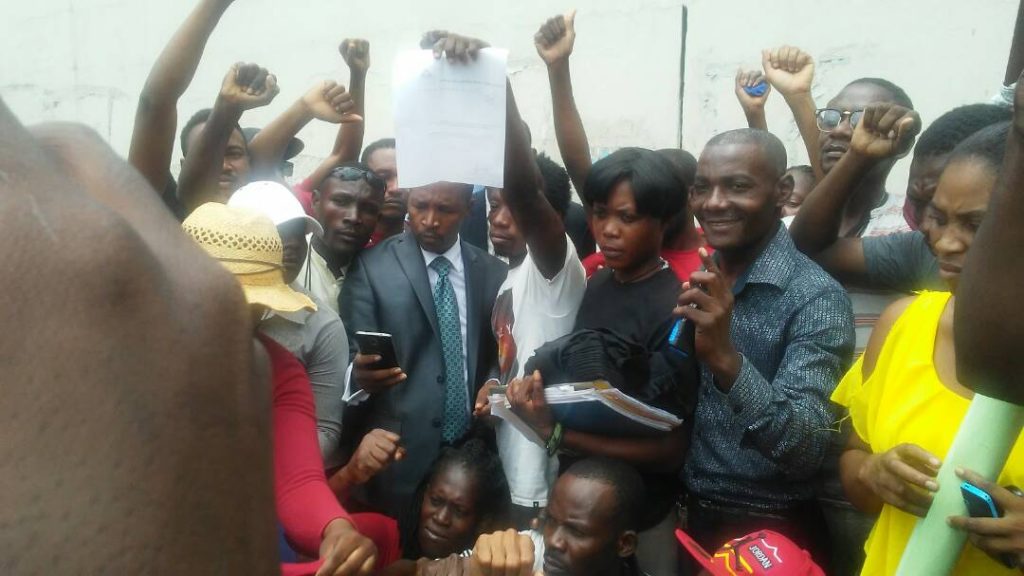 Garment workers and SOKOWA union members at the CODEVI Free Trade Zone in Ounaminthe, Haiti hold another protest for 800 Gourdes.

In Port Au Prince, Haiti, workers at Premium Apparel are denied entry into the factory, because of their participation in organizing for 800 Gourdes.

CONTEXT: Why so resistant to respecting workers and adjusting the wage?

The Haitian government and factory owners have made some mild acknowledgements of the situation, but so far have only put forward symbolic gestures.

On 6/5/17, Batay Ouvriye organizer, Yannick Etienne, was supposed to speak in front of Parliament, to the Senate Commission on Labor, but government and factory owners delayed the agenda item. Parliament has also requested people to come speak about the conditions of garment workers… something they already know.

The CSS – the State Commission on Salaries – is supposed to be negotiating about the wage adjustment. This commission is comprised of government officials, factory owners, and labor representatives. However, as workers are the minority in this commission, decisions made are normally not in the interest of labor. The commission is another sort of PR front.

Organizers in Haiti tell us there are two major reasons that the Haitian state, factory owners, and major brands really do not care about workers’ interests:

This is why the work of Batay Ouvriye, and their affiliated textile unions – SOTA-BO, SOKOWA & SOVAGH – is so important. They are organizing a movement of people – workers, peasants, neighborhoods – who are pushing back against these attempts to exploit the Haitian people. They are growing the idea among Haitians that they only way forward is through collective struggle for a better Haiti.

Please make a contribution to aid them in these efforts. Click here to DONATE.

Also, be sure to stay up to date. Click here to sign up for Rapid Response Network updates.
THANK YOU FOR YOUR SOLIDARITY. <3