If you’ve been following RRN updates, you know there is a lot happening in Haiti at the moment:

May 1st is International Workers’ Day! This day began as a commemoration of Chicago workers’ fight for the 8 hour work day and the right to organize.

In Haiti, workers are still battling for these essential rights.

April 6, 2017 – Platform of Garment Industry Unions (PLASIT) held a press conference in Port Au Prince, listing textile workers’ demands and called for countrywide mobilizations leading up to May Day. (Read the full press release at the bottom of this page).

PLASIT is a coalition comprised of three unions in the three largest industrial parks of Haiti: SOTA-BO (Union of Textile and Garment Workers – Port-au-Prince), SOKOWA (Union of Codevi Ouanaminthe Workers – Free Trade Zone) and SOVAGH (Union of Valiant Workers in S&H Global) in Caracol. PLASIT and the trade unions are affiliated with Batay Ouvriye, an independent workers movement in Haiti. 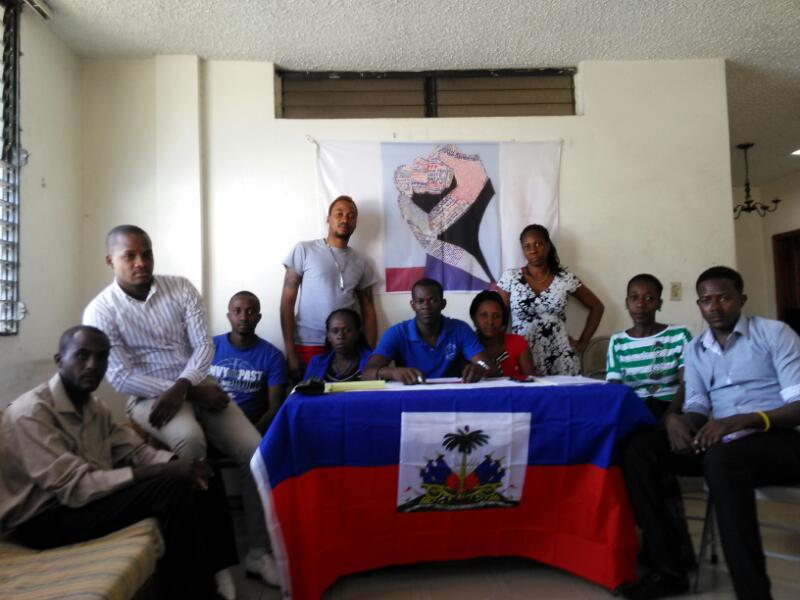 Here are some of their demands:

“May Day is fast approaching. PLASIT asks all workers and laborers all over the country to mobilize, organize, demonstrate and protest to fight for our rights. May Day 2017 must be a day of RESISTANCE.” 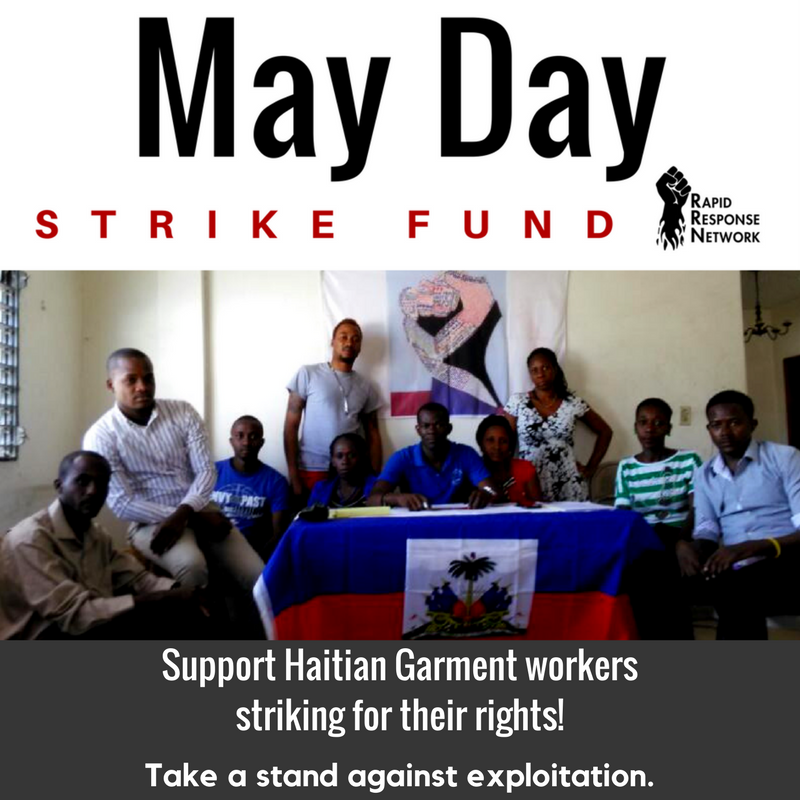 The RRN Calls for Solidarity and Strike Fund Contributions!

Workers are determined to continue with the ongoing strikes. They are fierce and brace, but they are also hungry, and funds to continue the strike are low.

Stand with workers fighting for the their fights. Stand against exploitation.

These funds will be used to support the ongoing strikes at H&H Textiles and Codevi Free Trade Zone. Funds may also be used for other protests, leading up to May Day.

Here are ways you can contribute:

3. Email the RRN if you’re in the Miami/Ft. Lauderdale area, and you’d like to send cash/check to be wired to Haiti – RRNsolidarity@gmail.com.

We extend our greetings to all the members of the media who are here to attend PLASIT’s press conference. PLASIT is the Platform of Garment Industry Unions. PLASIT-BO is comprised of 3 unions that are engaged in struggles in the 3 largest industrial parks of Haiti: SOTA-BO (Union of Textile and Garment Workers – Port-au-Prince), SOKOWA (Union of Codevi Ouanaminthe Workers – Free Trade Zone) and SOVAGH (Union of Valiant Workers in S&H Global) in Caracol.

Since it was instated, for the last 4 years, the KSS (Konsèy Siperyè Salè / Supreme Council on Wages), has failed to carry out its functions, as mandated by article 4 of the 2009 Law on the Minimum Wage. Every October, the KSS has to submit its recommendations on all minimum wage adjustments to the government, based on its study of macro-economic indices in the 3 months prior to the end of each fiscal period. Up to today, the KSS has failed to issue its recommendations for the fiscal year 2015/16. As workers, we don’t know where we stand. We ask the Moïse-Lafontant government to fulfill its responsibilities in this matter.

PLASIT also denounces the inability of the Haitian State to ensure that garment workers’ rights are respected when we consider that all the regional offices of the Department of Labor and Social Affairs lack qualified personnel and resources to adequately perform their duties. For example, the inspectors at the regional office of Fort-Liberté are unqualified and have failed to intervene to implement the reforms that we have petitioned for. These inspectors let the bosses do what ever they want in reprisals against the Caracol workers. The regional office director uses the office vehicle for his personal use and the inspectors lack means of transportation to fulfill their duties. On top of that, the regional office in Fort-Liberté is too far from the Caracol industrial park. It should be located in the Caracol commune instead of the Trou-du-Nord commune.

PLASIT denounces the imposition of all kinds of taxes by the DGI (National Tax Bureau) on workers while the Haitian State fails to provide any services in return for these taxes such as access to electricity, drinking water, public market places, roads, etc.… We stand opposed to the 13% tax on workers’ pay imposed by the DGI on all public and private sector workers. We ask that all workers and laborers engage in civil disobedience to protest and stop this unfair taxation: No Services, No Taxes!

PLASIT denounces the wave of unfair and arbitrary anti-union practices by bosses in the garment industry sector, such as those in Quality Sewing, Abraham Felix, one of the most reactionary garment bosses, and also in H&H Textiles, which has a torturer, Madam Kan, who mistreats workers with impunity.

May 1st, May Day, is fast approaching. PLASIT is launching a large mobilization until May Day 2017. PLASIT demands:

May Day is fast approaching. PLASIT asks all workers and laborers all over the country to mobilize, organize, demonstrate and protest to fight for our rights. May Day 2017 must be a day of RESISTANCE.