“It is slavery all over again.”
– Anonymous Haitian garment worker

TODAY, Monday, June 26, 2017, Haitian garment workers in Port Au Prince are in the streets again, continuing their fight for a minimum wage adjustment from 300 Gourdes (a little less than US $5) to 800 Gourdes (about US $12).

We often hear that it’s OK for workers in dominated countries to receive such low wages, because cost of living is far lower than the US, Canada or Europe. However, the reality is that wages in Haiti have not kept up with the cost of living. Workers are paid in Gourdes, but they consume in US dollars, because most food and other goods are imported, not produced in Haiti. So, the cost of goods is not that different from the US.

With the wage of about $5/day (US), workers’ pay is mostly absorbed by food and transportation to and from work. When payday comes, they are saddled in debt from borrowing for food, rent, and education for their children. So, they pay off as many debts as they can, and start the next week(s) still in debt, still hungry, still on the brink of homelessness.

Factory owners, like Charles H. Baker, Clifford Apaid, George Sassine, Allain Villard, and Fernando Capellan, make millions of dollars in profits. They produce for brands and stores like Gildan Activewear, Hanes, Fruit of the Loom, Levi’s, Gap, JC Penney, Walmart and Target. They justify starvation wages with the mantra of, “something is better than nothing.”

Workers cannot survive on 300 Gourdes. They are strung along, paid just enough to get back to the factory… never enough to escape their exploitation and debt.

This is WAGE SLAVERY, and workers are justly fighting back for their rights.

Since May 19, garment workers have carried out strikes, work stoppages, marches, and demonstrations, throughout Haiti in four main cities – Port Au Prince, Carrefour, Ounaminthe and Caracol. They stand firm in their demand for 800 Gourdes.

Friday, June 23rd, workers held a sit in, in front of the SONAPI Industrial Park in Port Au Prince. 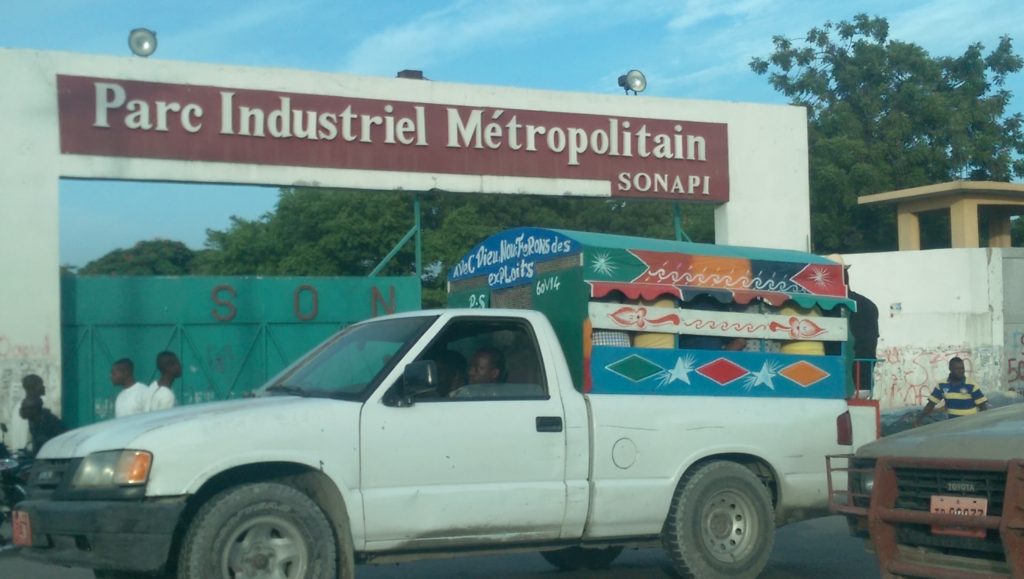 Saturday, June 24th, workers again gathered outside SONAPI in Port Au Prince to hand out leaflets and to call workers to mobilize again this Monday, June 26th, in support of their demand for 800 Gourdes. In the video below, they chant, “Monday morning! Agitation!”

Saturday, June 24th, Le Nouvelliste, the main newspaper of Haiti, published an article on the perspective of factory owners. Six textile manufacturing companies – The Willbes Haitian SA; MGA Haiti SA; Astro Carton d’Haiti SA; Haiti Cheung Won SA; Textile Youm Kwang SA and Pacific Sports Haiti SA – are pressuring president Jovenel Moise to halt workers’ mobilizations. After weeks of stopped and slowed down production, the companies have lost millions of dollars (US). Now, they say that if the workers do not stop, they will be forced to seek “other alternatives in search of stability.”

For the garment industry, the globe is viewed as two separate sections. They look at Asia as one option, and Central/South America/the Caribbean as their other option. But usually they like to utilize both, rather than choosing between them. They ping-pong with their business from one country to the next, pitting nation against nation in competition with one another for who can provide goods at the lowest cost.

Union organizers in Haiti shared their perspective of the situation. They say this article is a preface indicating the possibility of two things:

I am messaging in support of Haitian garment workers.

Factory owners and the brands they produce for make millions, sometimes billions of dollars in profit by exploiting these workers with wage slavery. They are within their rights to organize and demand decent pay to house, feed, clothe and educate themselves.

Garment workers are not wage slaves.

Stop the repression against workers!

Your contribution will be used to provide meals to workers at meetings; to print leaflets; to help transport organizers; and to recoup the costs of mobilizing in four locations for a month.

After weeks of strikes and mobilizations, the workers are now regrouping. Many have been arrested. Some must return to work in order to eat. Some have been denied entry into the factories for their participation in the strikes.