Port Au Prince, Haiti – Friday 5/19/17 and Saturday 5/20/17, about 4,000 garment workers went on strike and took the streets to demand an increased minimum wage, shutting down dozens of garment factories.

Haitian garment workers receive the lowest wage in the western hemisphere. Their wages are often consumed just by the transportation costs of getting to and from work. Most workers live in debt, and are often on the brink of hunger and homelessness.

Production quotas are often set impossibly high. Factory owners and management do not respect the law, and often do not pay the existing minimum wage. Union members and organizers are constantly harassed and arbitrarily fired for exercising their legal rights.

Currently, the corrupt Haitian government is also trying to extract a 13% wage tax from garment and other workers. They claim it is for social services provided. Meanwhile, access to electricity, clean water, decent roads, schools and hospitals does not exist.

Garment workers with PLASIT-BO have said, “Enough!” When you are drowning in debt; when there is not enough money for rent or food; when the company you work for is stealing your wages; there is only one option – STAND UP & FIGHT BACK.

Below is a brief report we received from organizers with SOTA-BO textile union & PLASIT-BO; How you can help; A list of entities involved for further context; and a statement regarding the strike from PLASIT-BO (in Kreyol).

Workers at several factories did not show up to work, shutting down production. Instead, they marched in the streets to demonstrate for their rights.

The textile workers marched from outside the SONAPI Industrial Park towards the presidential palace until police stopped them.

At the same time, The Association of Industries of Haiti (ADIH) put out statements to the press claiming that workers broke into factories, attacked the factories, and beat fellow workers inside the factories. Hence, they had to close on Friday 5/19 and would remain closed Saturday 5/20 and Monday 5/22. 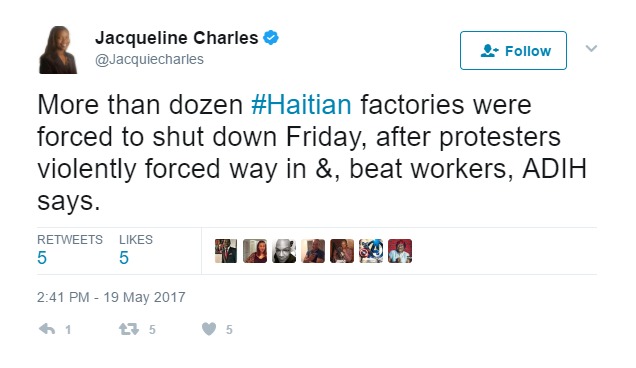 There has been no evidence put forward to support these claims, and the RRN encourage reporters, such as Jacqueline Charles, of the Miami Herald to check facts before echoing the claims of factory owners.

The strike continued on Saturday, and workers took the streets again.

Meanwhile, at Sewing International, SA (SISA) factory, many workers stopped their work to join the demonstration, but were locked inside the factory gates by management. Eventually, they were able to join the march.

Thousands strong, garment workers blocked the road to Toussaint Louverture Airport, which is near the Sonapi Industrial Park.

To break up the workers, CIMO, Haiti’s riot police attacked them with tear gas and some kind of acid water that irritates the skin.

The Association of Industries of Haiti (ADIH) claims that workers attacked garment factories and fellow workers during this strike and mobilization. This is completely untrue and unsubstantiated, but these factory owners are using these false claims to call for repression against the workers who are justly (and legally) fighting for their rights. The factory owners claim violence by the workers for demanding the right to decent wages so they can eat, house, clothe, and educate themselves. But it is the factory owners who exercise violence everyday by exploiting these workers, illegally breaking up union activity, harassing and firing union members, and calling for police repression against the workers.

ADIH is framing this strike as being led by isolated “syndicalists and militants” who have pressured and intimidated workers to stop their work in the factories. The videos in this post do not demonstrate people being pressured to remain. Instead, they show workers march and singing passionately, denouncing the government and fighting for their rights, for decent pay, for food, housing, healthcare, and education. These workers, thousands of them, made the choice to strike.

Next Steps: how you can help

We will wait to hear from SOTA and PLASIT organizers in Haiti. The strike may continue today, Monday, 5/22/17, and they may need the RRN to help put pressure on certain entities.

Here in the US, we are the consumers of goods inevitably produced through a process of exploitation. At this moment in time, when so much seems so wrong in the world, when we often feel powerless, let’s build people’s power!

Take an active stand with workers fighting exploitation, with people fighting for their rights.

1 – Contribute to support Haitian garment workers ongoing fight. Your contribution of $50, or any amount, will help workers continue their fight.

2 – Follow RRN for updates & other ways to take action.

PLASIT–BO – a coalition of the independent textile unions throughout Haiti that are affiliated with Batay Ouvriye. Unions include SOTA-BO in Port Au Prince; SOKOWA in Ouanaminthe; and SOVAGH in Caracol.

The Association of Industries of Haiti (ADIH) – is the main organization of the manufacturing sector in Haiti. Its mission is to promote and develop Haiti’s industrial sectors on a worldwide competitive basis. It’s comprised of several factory owners who work with the Haitian and US states to ensure low wages and to break up union activity, so that the Haitian garment assembly industry remains “competitive” on the global marketplace. They represent the interests of factory owners to maintain the exploitation of garment workers.

The fight for a higher wage (800 Gourdes) in Haiti is ongoing.  This fight, as well as the basic right to organize, is constantly met with harassment, illegal firings, and often violent repression.  Manufacturers and the brands they produce for vehemently oppose workers’ rights because they interfere with their ability to extract as much profit out of the production process as possible.  This means exploitation is required, and it takes many forms.  Setting impossible production quotas to prevent workers from receiving the minimum wage, wage theft, and unpaid overtime are a few of these methods.

Statement & demands from PLASIT-BO regarding the 5/19/17 Strike: