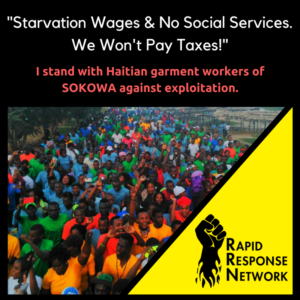 Ounaminthe, Haiti – On January 31, 2017, workers of the SOKOWA textile trade union, working in the Codevi Trade Zone, went on strike and took the streets protesting a 13% tax on their wages. Thousands of other workers and other people joined them to march.

While a wage tax sounds like a normal practice, this is a means of the state and its officials to accumulate more wealth off the backs of workers. They already receive starvation wages with no public services.

SOKOWA workers are asking for international solidarity in this fight. See the “How” section below on how to take action.

Below is a basic run-down of the situation and the SOKOWA workers’ leaflet they handed out to mobilize people to take the streets!

SOKOWA is a textile trade union, affiliated with Batay Ouvriye, in the Codevi Free Trade Zone (FTZ) in Ounaminthe. The wage tax also affects other workers within the free trade zone, so they joined the march too.

Manufacturers & Brands in Codevi FTZ – Dominican company, Grupo M, manufactures clothing for a variety of U.S. companies — Sarah Lee, Nautica, Dockers, Fruit of the Loom and Levi Strauss. These companies make millions of dollars in profits and pay nearly nothing in taxes, nor investments into social services.

Codevi Free Trade Zone Management is the entity responsible for applying the taxes to workers’ wages.

Haitian state and officials – known for ongoing corruption, in reality, most of this tax money will be used to line the pockets of state officials.

The Haitian state is pushing the Codevi FTZ to take a 13 percent tax out of workers’ wages. One is IRI, which is a tax on income and the other is CFGDCT which is Contribution to the Administrative and Development Fund for the Territorial Localities.

Workers already receive starvation wages. The legal minimum wage on the books is 350 Gourdes, or $5.15 US, per day. But the reality is that they often don’t receive this full amount. They live their lives in debt, and are often on the brink of hunger and homelessness.

SOKOWA workers argue that they are not against a wage tax, in general, but this is just a means of exploitation of workers and working people. The Haitian state is rife with corruption with officials making exorbitant salaries, while paying hardly any taxes themselves.

Additionally, the manufacturers who set up shop in Haiti make millions and often billions of dollars in profit. They are attracted to Haiti because of extremely low wages (lowest in the Eastern hemisphere) and no taxation or regulation.

Here are some of the benefits given to manufacturers in the Ounaminthe FTZ, according to the US Department of State:

Textile workers of SOKOWA went on strike and led a march on January 31, 2017. It was estimated that nearly 10,000 people joined them in the streets to protest the wage tax.

Ouanaminthe is in the northeast region of Haiti, right on the border of the Dominican Republic.

Here’s how SOKOWA workers are asking you to take action!

Email your statement of support with workers’ demands.
SOKOWA is gathering signatures for a petition they will take to the Codevi FTZ management.
Let’s show international support!

Copy and paste the message below, and feel free to add your own note!
Send the statement to Batay Ouvriye, and they’ll compile our messages to take to the management of the Codevi FTZ.

I support SOKOWA and their decision not to pay the following deductions from their wages: IRI (Taxes on Income), CFGDCT (Contribution to the Administrative and Development of Territorial Localities), CAS (Social Assistance Fund) and DGI (the General Taxing Department/Authority).

We say: There are no services and workers are earning low wages. No taxes for no services!

For a number of days now, words are going around at Codevi. It’s about paying taxes or tariff to DGI (General Department of Taxes, Tariffs and Duties) meaning that deductions will come out of our already measly wages reaching up to 10% of our income. We have to know there exists a law already about that. This is not new. Codevi never made the deductions on our income to send to DGI. Today, DGI is questioning that. Codevi, according to law must make automatic deductions from our income to send to DGI. They’re talking about two different things. One is IRI, which is a tax on income and the other is CFGDCT which is Contribution to the Administrative and Development Fund for the Territorial Localities. We must pay IRI if our annual income is 60,000 Gourdes (U.S. $833.00), and for CFGDCT, 1% must be taken if the monthly income is 5,000 Gourdes (U.S. $69.00).

It’s true, as citizens, we must pay taxes or tariffs. However, we must see where it’s going. In Haiti, DGI is collecting taxes and tariffs but as citizens we never get services. We have to do whatever we can to live without the services the state owes us.  There are no roads, no electricity, no drinking water, no hospitals, no clean marketplace, public squares, no parks to play or for sports in the city. SERVICES ARE ZERO.

TODAY, THEY WANT TO INCREASE THE BUDGET, IT’S ON THE BACKS OF US, WORKERS AND OTHER TOILERS, THEY WANT TO DO IT. We say NO, THAT’S NOT HAPPENING !

We do not agree with any deductions for IRI nor for CFGDCT from our measly income in the factories. We do not agree that parlementarians, prime ministers and presidents and other bigwigs in the state are filling up their pockets with taxes they are forcing us to pay. As a matter of fact, with the rising cost of living, our purchasing power has plummeted. Reducing our income further through payment of taxes and other duties would make us poorer everyday. In addition, monies are collected but expenses are incurred without transparency and no one tells the citizens anything. We the workers together with other toilers in Ouanaminthe (Wanament), we say : NO, WE DON’T AGREE WITH DGI THAT IS FORCING US TO PAY IRI AND CFGDCT !

WE REFUSE TO PAY TAXES AND DUTIES WITHOUT GETTING SERVICES !