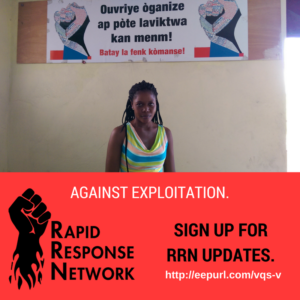 Last week, SOTA-BO and Haitian garment workers has a small victory in their fight for the right to organize. Five women – known union members and leaders – were arbitrarily fired.* (Click here to read more about this.)

Workers are fed up. Every day is a fight to exist. Most work 12-16 hour days. They receive starvation wages, while factory owners, brands and stores make millions, sometimes billions of dollars in profit. They have the legal right to a union and the right to organize. But at every turn, this right is suppressed. Now, they are taking matters into their own hands. On Tuesday 1/24/17, SOTA-BO announced a strike for Thursday, 1/26/17. To avoid a work stoppage, H&H rehired three of the workers.

Here is a translated statement directly from an H&H worker and SOTA-BO member about the conflict. They made this statement on Wed 1/25/17, just after H&H announced they would rehire three of the five fired workers.

…Really, they never responded so fast, whenever we presented them with a problem… You see, those three comrades they took back on the job, it’s because they have a big contract order to fill. They heard word of the strike and became anxious… Kim, the boss… they’re caught up in anxiety hearing word of the strike… Think about it!

They invited members of the committee for a meeting. The members of the committee went and when they got there, negotiations began. We raised our objections because five members of the union committee were fired.  We had to walk out. They said, “OK,” when we mentioned the strike, but still they didn’t quite believe we would do it. At around 11:00 AM, we had leaflets about the strike and started distributing them. Now, at this point, they began to see this is serious.  While we were handing out leaflets, they asked to see comrade Cain and three of the fired comrades.

So today at 9 am, they negotiated and took those three comrades back on the job. Now, we have two more still out. They want to avert the strike. A big contract for new orders is hot in their hands.  I am happy for those comrades who will return to work tomorrow, but we still have two left. It’s one thing after another…we will make sure those three settle in, and then we will request the other two be counted in too… We will demand again and if they disagree, we will present another strike notice because the contract order has just begun… If they want a work stoppage, we’ll do it. If they don’t want a work stoppage, they will take back the other two workers on the job.

As the worker says, they may strike again, if that’s what it takes for H&H to respect workers’ right to organize.

Please be sure to keep up with the RRN to lend your solidarity to the workers who sew the clothes we wear each day.

* We previously reported that four women workers were fired. There was a fifth worker, but we did not receive a report on the circumstance of her firing.