In preparation for and in the wake of hurricane Irma, we’ve gotten behind in sharing updates with you.

Here’s an important update from garment workers of in the north of Haiti, in the town of Ounaminthe, who continue their fight against an unjust wage tax. 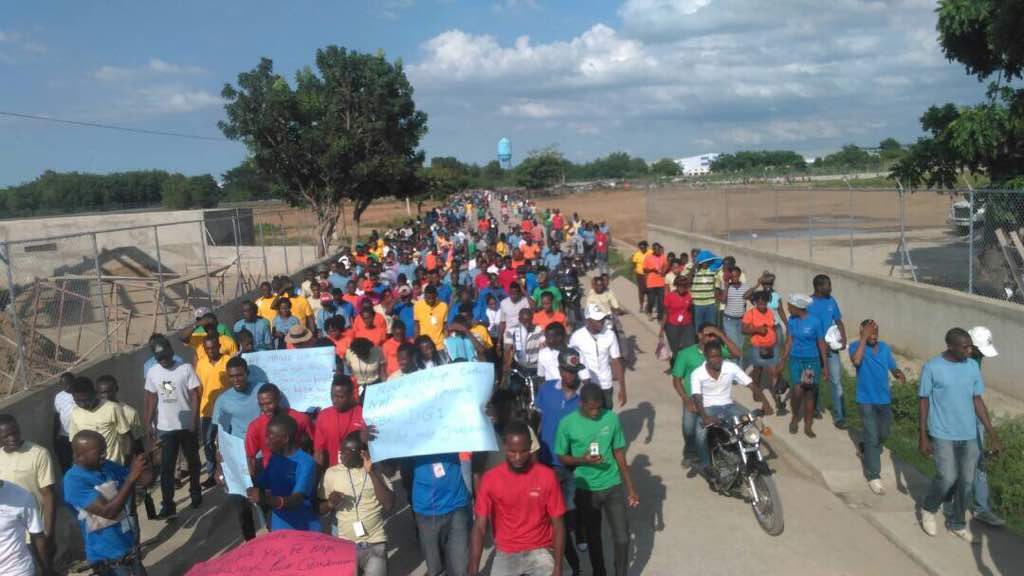 August 30 2017 – Garment workers took the streets to protest a wage tax that supposedly is for social services. In reality, there are no social services and the tax money is being used to line the pockets of corrupt politicians.

The workers in SOKOWA textile union at the CODEVI Free Trad Zone have led the fight against this taxation since the beginning of this year.

Click here for info on the basics and back story on this issue.

Read the press release below for a current update.

Thank you for staying informed about this important issue. Workers may call on us for support in the future.

Greetings to the members of the press, print and television, that are covering the press conference of PLASIT-BO is having today. PLASIST-BO is the Platform of Textile and Apparel Factory Union/Batay Ouvriye. PLASIT-BO consists of 3 unions active in the 3 largest industrial parks in the country, namely, the Textile and Apparel Workers Union (SOTA-BO), CODEVI Ouanaminthe Workers Union (SOKOWA), and the S&H Militant Workers Union (SOVASHG) in Caracol. PLASIT was part of the organization of the large mobilization on the minimum wage launched in the month of May. On the minimum wage question, we continue to disagree with the decision of the Moise/Lafontant government took to add only 15 Gourdes ($0.23) to the 335 Gourdes ($5.23) the fake Supreme Salary Council (CSS) recommended. All of our demands stand. One of them is the question of IRI (Tax on Income) the state wants workers to pay on the measly salary they just set for us.

Today many are screaming bloody murder about the legislation on the 2017-2018 Budget, in particular on the increase of taxes and the imposition of a 10,000 Gourdes ($156.25) forfeiture tax. PLASIT-BO condemns this approach of the government, which tends to squeeze the poorest, those who have the least income in this budget. When we were demanding 800 Gourdes ($12.50) at the least as minimum wage, the capitalists and their allies in the government, told us we were exaggerating.  Today, after the hike in gas prices, increase in the cost of living, we, the workers, do not agree that taxes and tariffs keep increasing and we get neither service nor investment in quality public schools for our children, decent public housing so we don’t have to live in sub-human shacks. This is why we are calling on the Senate to reject this whole budget.

In our demands, we demanded that the government increase the income bracket from 60,000 Gourdes ($937.50) to set it at 150,000 Gourdes ($2,343.75) to facilitate the day workers just as the factory workers to pay less Tax on Income (IRI). However, we notice they keep the same income ceiling and add another 10,000 Gourdes ($156.25) as forfeiture tax. They are squeezing more taxes and tariffs from the people every year while many large enterprises are getting fiscal and duty exemptions for a period of 15 years approximately. In addition, in that budget, nowhere do we see any moneys toward the purchase of the buses for the transportation of workers, food subsidies in the industrial park and manufactures and public housing as was promised.

They have to reshuffle the card deck completely in the reduction of moneys allocated to the presidency, the prime minister and parliament, tax luxury articles and poisons to the health of people and the environment of the country to achieve a realignment that would allow the state to have additional resources to better public services and remove the allocations in the category “Other Public Interventions”, which represents a blind alley in the budget. To top it all, they must take drastic measures to combat corruption, stealing in the state, make sure such institutions as the Superior Court of Accounts and Administrative Litigation, UCREF, and the Courts of Justice to play their roles against all the culprits, the BIG EATERS, the big and small time corrupters, the mafia network in the state and the private sector etc. There is no justification for additional taxes and tariffs if there are no services and a fight against corruption and waste.

We are calling on all workers in the factories to open up their eyes on the budget question. The fight for social benefits we raised in various debates on the minimum wage, must be reflected in the budget for them to become reality. And in this climate of corruption, stealing and all types of waste in the state, we must say we do not accept the 2017-2018 Budget legislation on the tax and tariff hikes, they are squeezing them out of us. With the large amounts of money allocated to the parliament and the executive while there is not enough money for public services and long-term investments, the state of misery is worsening in the country. We must fight to force the parliament to realign the budget for more hospitals, schools, universities, better roads, electricity, public transportation, technical and financial assistance to the small agricultural producers. Therefore, we must do our utmost to make sure this budget doesn’t see light of day. Our immediate interests as workers and laborers are not reflected in it. Only the interests of the big wigs are defended. LET’S RAISE OUR VOICES AGAINST IT! Let’s use the example of the CODEVI workers who stood up, marched against paying the taxes on income (IRI) without getting services in Ouanaminthe and against this criminal budget. THE FIGHT WILL CONTINUE WITH MORE FURY! THANKS!

1)   The Senate reject the whole budget

2)   Send it back to the government with the changes that take into account the interests of the masses, and the social benefits promised.

3)   The people to remain vigilant so this criminal budget is not forced down our throats by mobilizing;

And we will organize sit-ins in front of SONAPI to say ‘no’ to this budget and demand the increase of the income ceiling for tax on income they’re forcing us to pay to 150,000 gourdes.