Three workers were severely injured. Many were hurt, including a pregnant woman. A representative of Batay Ouvriye was beaten.

Workers were protesting an increased production quota, imposed by management, when the police opened fire.

In the video below, workers confront management and the police in the office of Fairway Apparel.

This is a photo of one of the police officers who opened fire on the workers. 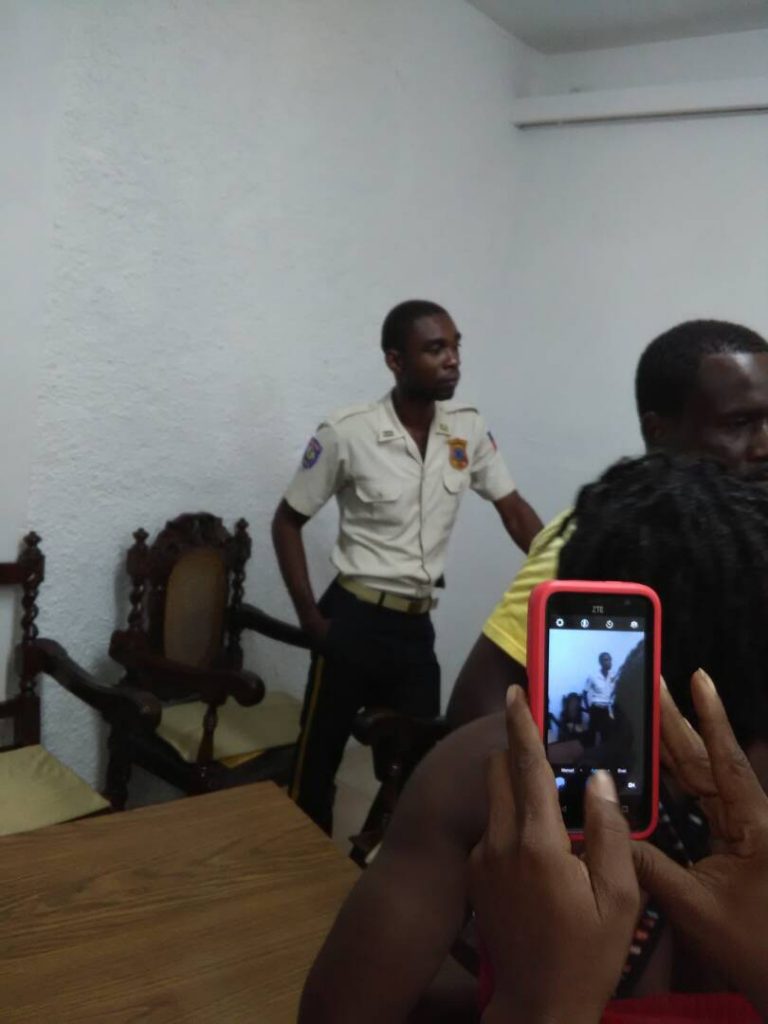 Production quotas in textile factories are set impossibly high. Factory owners and management do not respect the law, and often do not pay the existing minimum wage. Often, workers will only make the minimum wage if their module meets the quota. Union members and organizers are constantly harassed and arbitrarily fired for exercising their legal rights.

Monday, 07.17.17 – Workers showed up to find Fairway Apparel closed for Monday 7/17 and 7/18. In the video below, the woman says, “This is the picture of the many people who cannot enter the work place.” 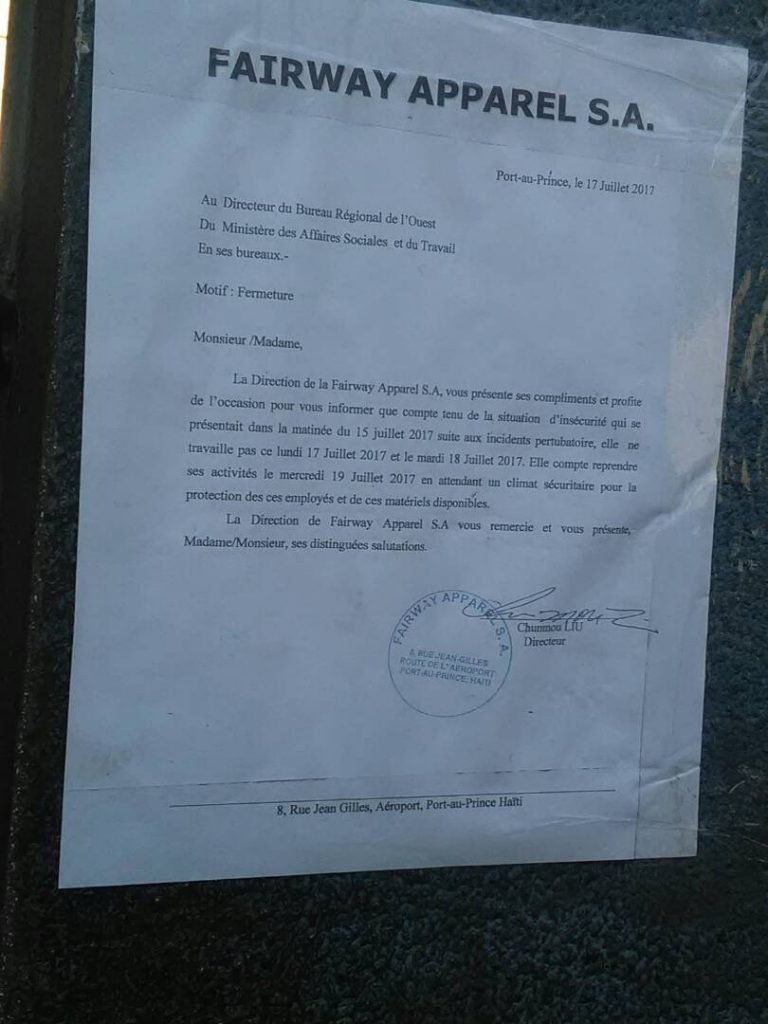 Garment workers, organized as unions, have been striking and mobilizing since May 19 for a minimum wage adjustment of 800 Gourdes (US$12.80); meal, transportation and housing subsidies; social services; and a stop to increased production quotas.

Tuesday, 07.18.17 – Fairway management fired 13 workers. They are all union members. 7 of these workers are from SOTA-BO. The below letter states that the workers were fired for inciting workers, implementing an illegal strike, for being violent, and for using their cell phones. But, who was shot? 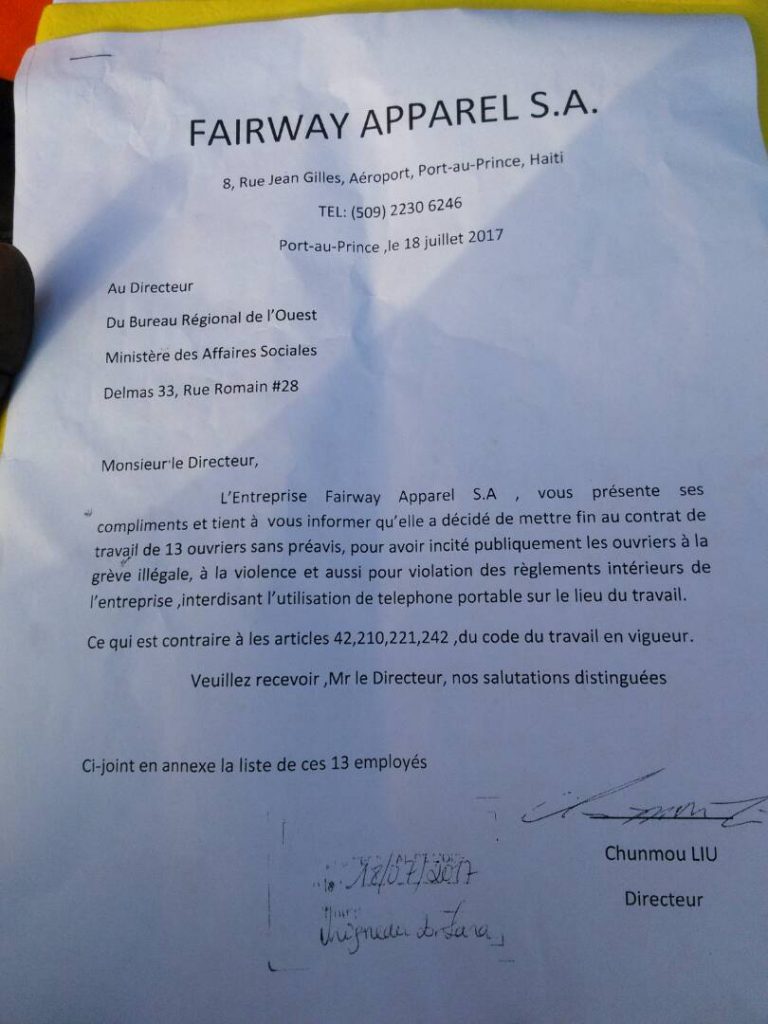 We know the real reason for these firings is union-busting and a complete lack of respect for workers. Factory owners see and treat workers as slave labor, not as humans.

Since May 19, garment workers have been striking and mobilizing for:

Now, workers at Fairway are standing in solidarity. They refuse to work until the fired union members are reinstated.

TODAY, please stand with these Fairway workers in solidarity.

Workers are asking that we flood the email inbox of Liu Chunmou, Director of Fairway Apparel.

Below is an email you can copy and paste.

Send it as many times as you can, from all your different email accounts.

I am emailing to say that as Fairway Apparel attempts to stop workers from receiving a decent wage, the world is watching.

You claim that workers are acting violently, as you call in the police to shoot them.

Workers are within their rights to organize and demand decent pay to house, feed, clothe and educate themselves.

They cannot be punished for exercising their rights as a union.

Organizers in Haiti tell us there are two major reasons that the Haitian state, factory owners, and major brands really do not care about workers’ interests:

This is why the work of Batay Ouvriye, and their affiliated textile unions – SOTA-BO, SOKOWA & SOVAGH – is so important. They are organizing a movement of people – workers, peasants, neighborhoods – who are pushing back against these attempts to exploit the Haitian people. They are growing the idea among Haitians that they only way forward is through collective struggle for a better Haiti.

Please make a contribution to aid them in these efforts. Click here to DONATE.

Also, be sure to stay up to date. Click here to sign up for Rapid Response Network updates.

THANK YOU FOR YOUR SOLIDARITY. <3