2018/10/24 – Haitian garment workers, illegally fired for exercising their union rights, are asking for our support. Will you help by voicing their demands? 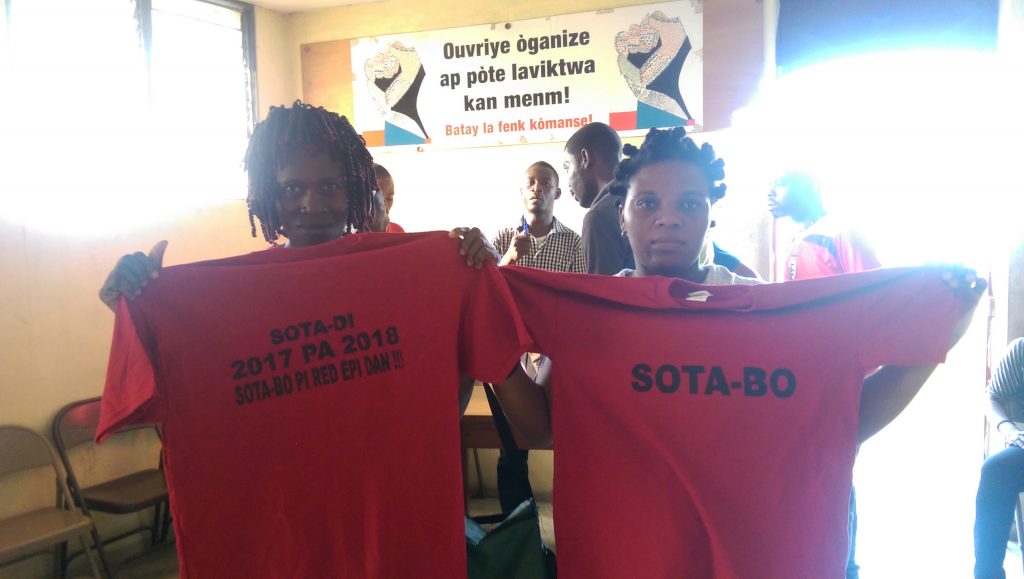 Every day, we dress ourselves in the products of exploitation. Meanwhile, the workers who produce these goods are struggling for basic rights.

Scroll down for more background info.

Clifford Apaid – head of the Apaid Group/AGA Corp which owns several textile factories in Haiti. The Apaids are one of the wealthiest families in Haiti deeply involved in politics, allowing them to influence government regulatory agencies. Along with other factory owners, they strongly resist wage adjustments and increases. They consistently repress workers’ legal right to organize.

Clifford Apaid is a graduate of Florida International University. He has a bachelor’s in Management Information Systems, another in finance and a master’s in international finance. He is also a board member of the Haitian Association of Industries (ADIH) and of the SOFIHDES development bank in Haiti.

You & Me/Consumers – Most of the clothing produced in Haiti is sold in the US and Canada, thanks to the HOPE and HELP Acts, which allow brands to pay zero tariffs to import its products from Haiti to the US & Canada. (This means no taxes are collected to use towards desperately needed social services, public resources, and infrastructure in Haiti).

Since 2017 SOTA-BO has been organizing series of ongoing strikes, work stoppages, walk outs, marches, and discussions to push for a minimum wage adjustment. They’ve handed out thousands of leaflets, sang songs about their struggle, and mobilized thousands of workers to join them.

Even though unions are “legally recognized,” hundreds of workers have been illegally fired for their legal acts of fighting for basic rights.

Many workers from Apaid factories, including Premium Apparel, Silver Linings and Maton have been out of work for over a year because of these illegal firings. They are struggling to exist.

You can click here to read the direct appeal for solidarity from SOTA-BO.

WHY Don’t They Just Pay Them?

Factory owners in Haiti generally hold no respect for workers. In a country where feudalist ideas still hold influence and there are thousands of desperate people looking for work, textile workers are seen as an inexhaustible resource for exploitation.

Manufacturers and the brands they produce for vehemently oppose workers’ rights because they interfere with their ability to extract as much profit out of the production process as possible.  This means exploitation is required, and it takes many forms.  Setting impossible production quotas to prevent workers from receiving the minimum wage, wage theft, and unpaid overtime are a few of these methods.

The reality is that no matter what brand you buy, from clothing to food, every good is tied to exploitation at some point in the production process.

Rather than scour the internet for guilt-free products that do not exist, stand behind the people who produce the goods we consume, the people fighting exploitation daily.

We are not just passive, individual consumers. We are people with conscience, with a human instinct for solidarity and collective action. We are many.

Lend your solidarity. Take a stand with Haitian garment workers!

HOW You Can Help

I am emailing on behalf of the many illegally fired workers at your factories – Premium Apparel, Maton, and Silver Lining.

I insist that you and your companies respect the rights of union members and meet the following demands: