September 15, 2017 marked the sixth anniversary of SOTA-BO – an independent textile union, based in Port Au Prince, Haiti and affiliated with the Batay Ouvriye (Workers Fight) movement!

Since their start in 2011, the union has grown in numbers and strength! Workers with this union were instrumental in leading the country-wide, three month fight for an increased minimum wage of 800 Gourdes. This fight continues, as well as struggles against corrupt wage taxes, as well as the general state of economic and political crisis in Haiti.

These workers face a serious battle, but their organization continues to strengthen and grow. Students, peasants, street vendors & the poor are joining this movement, led by workers.

To mark their six years, workers demonstrated in Port Au Prince, and distributed leaflets about their fight and their perspective on the state of affairs in Haiti. 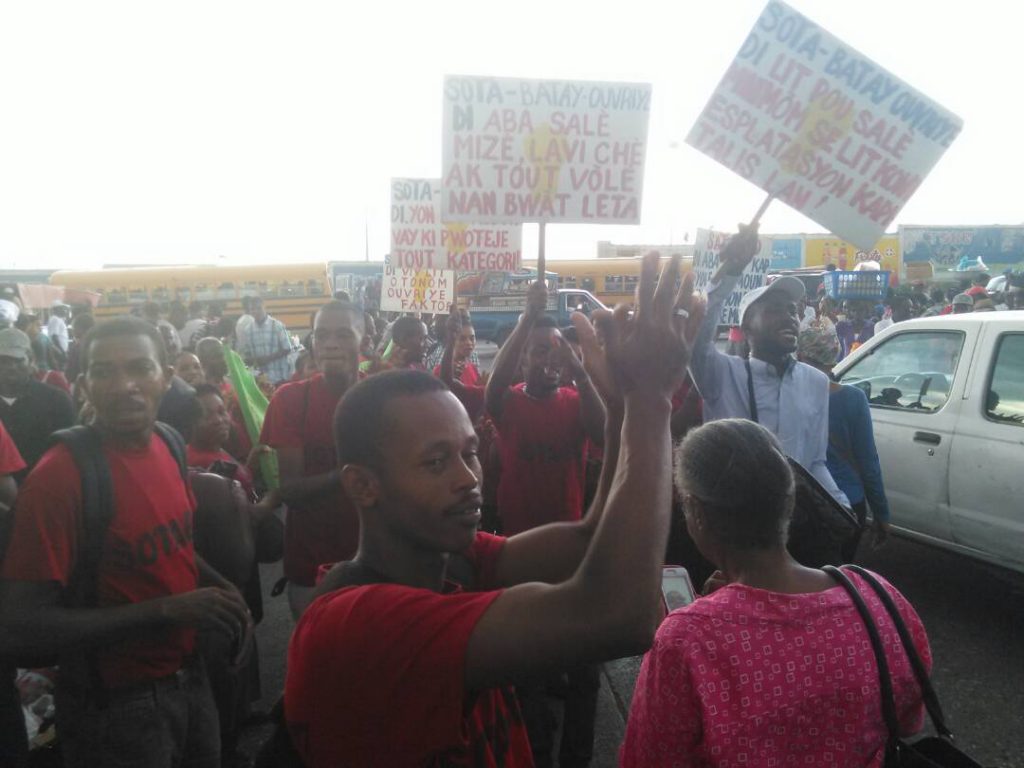 LONG LIVE THE STRUGGLE OF THE SOTA-BO WORKERS!

THERE IS NO STOPPING, PROCEED UNTIL FINAL VICTORY!

Please read SOTA’s leaflet below, translated from Kreyol to English.

The RRN stands in solidarity with this growing movement of workers and people fighting for their rights!

It’s been 6 years since the Textile and Apparel Workers Union (SOTA-BO) was founded!

SOTA-BO is one of the unions affiliated with the May First Union Federation/Batay Ouvriye. A union is a combative workers organization, fighting against the exploitation and domination of the capitalists on workers and also fight for democratic rights. In SOTA, we see clearly that Democracy is a tool for the capitalists to lean on and continue to exploit our labor power. We are aware that we must FIGHT TO CONQUER DEMOCRATIC RIGHTS IN THEIR DEMOCRACY, namely, the fight to force capitalists and their state to respect workers union rights in the factories. The center pole for the FIGHT for democratic rights is the FIGHT for WAGES. For the capitalists, the more they squeeze us, exploit us, the better for them. For us workers in SOTA, the more we FIGHT, the more we resist, the better for us. For SOTA, those 6 years are 6 years of STRUGGLE in which we empowered ourselves and at the same time achieved maturity against an enemy that, if we just blink, will destroy our gains. We learned it’s only through STRUGGLE will we grow up. It’s been 6 years of struggle in which we are building the road to the INDEPENDENT and AUTONOMOUS emancipation of our union.

After six years, where are we? We launched with 3 union locals. Today, we have more than 25 locals in different factories in Port-Au-Prince. We are working to expand our presence in all new Free Trade Zones to be established in the Metropolitan area. We are negotiating agreements for the recognition of the union in the factory and begin the process of getting a memorandum of agreement with the capitalists in the factories. We are going to continue to present our demands before the capitalists, before the Haitian state for our democratic rights in society, in the factories where we know, if the capitalists could, they would shut us up and put shackles on our feet so we could work without giving them any problems. They count well but calculate badly. So long as there is exploitation and domination, there will always be STRUGGLE AND RESISTANCE for better working and living conditions for workers. The task is difficult but this is what we are doing today.

However, we must point out that since the Moise-Lafontant government came to power, we witness an increase in anti union repression against workers both in the public and private sectors. Workers are under heavy attacks. It’s open warfare that this government is waging against workers and their unions. We lend our solidarity to all laborers being fired in institutions such as OAVCT, CNE, SUPERIOR COURT OF ACCOUNTS AND ADMINISTRATIVE DISPUTES, and all those fighting to return to work under new conditions. On our side, we will continue to fight to reinstate our comrades in H&H Textiles, Quality Sewing, SISA, PALM Apparel fired after the mobilizations for our demand for the 800 gourdes minimum wage. There are negotiations under way for our comrades to return to work. The government wants us to pay for their corruption and the moneys they stole for their personal gains. WE MUST SAY NO, WE’RE NOT OBEYING. WE WANT PUBLIC SERVICES WITH THE TAX MONEYS AND TARIFFS WE HAVE BEEN PAYING ALREADY. WE WILL NOT REMAIN QUIET ANYMORE ABOUT OUR MONEYS BEING WASTED.

The policies of this government, AND ALL THE PREVIOUS GOVERNMENTS, are to systematically attack the interests and rights of workers in the country in the INTERESTS OF ALL THE CAPITALISTS. We saw how it responded when it added only 15 gourdes on the 35 gourdes adjustment the CSS recommended on the 300 gourdes for the minimum wage. Still, nothing is said about the social benefits promised. So, it’s all bluffing, lies and repression this government is all about when workers fight for better living conditions in DEMANDING OUR DEMOCRATIC RIGHTS.

We are denouncing the budget that parliament voted which will squeeze the living juice our of us in taxes and tariffs without services. THE BLUFF AND DEMOGUERY MUST STOP. THIS IMPUNITY MUST STOP. CAPITALISTS CAN’T BE JUMPING UP FOR JOY ON THE MISERLY WAGES THEY ARE GIVING US. ENOUGH IS ENOUGH!

SOTA-BO supports the strike the transport unions launched for Monday and we will be present in all street mobilizations against the retrograde, anti popular budget they want to push in our throats despite all the protests. We will support the strike in our autonomy and independence. We agree with this generalized resistance movement. However, we think more discussions and struggles must be waged for the unification of the movement and also to isolate the bad apples who may simply want to unseat Jovenel Moise. WE MUST DRAW THE LESSONS OF THE PREVIOUS SRUGGLES.

What is SOTA-BO’s perspective today?

THE STRUGGLE FOR WAGES AS THE ENGINE OF OUR FIGHT AND ALL OTHER DEMANDS BEFORE THE CAPITALISTS AND THE GOVERNMENT AND GAIN MORE DEMOCRATIC RIGHTS IN THE PROCESS OF THE STRUGGLE.

Therefore, THE 800 GOURDES SALARY AND THE SOCIAL BENEFITS PROMISED ARE STILL ON THE ORDER OF THE DAY, and:

We will continue to fight to rewrite the Labor Code equitably where the rights of all worker categories are protected.

We will fight for the MAST to stop condoning impunity because when inspectors are needed to intervene, none is available.  MAST must separate social affairs tasks from that of labor issues. As far as Labor, we need a Ministry of Labor and Social Security exclusively. The mess, corruption and impunity in the ministry must end.

So, during the 6 years, we’ve grown and we continue to grow so SOTA-BO can become the COMBATIVE ORGANIZATION OF WORKERS IN THE WEST. To All workers, in textile and the local factories who are FIGHTING or are ready to FIGHT, join BATAY OUVRIYE TO BUILD A COMBATIVE AND VIGOROUS UNION MOVEMENT. We will continue to work so workers take the leadership of the fight of the union movement in their hands to bring their own orientation in general struggles of the popular masses.

LONG LIVE THE STRUGGLE OF THE SOTA-BO WORKERS! 6 YEARS ARE NOT 6 DAYS!

THERE IS NO STOPPING, PROCEED UNTIL FINAL VICTORY!