The RRN extends MASSIVE thanks to all who have supported Haitian garment workers in their fight for 800 Gourdes minimum wage. Thanks in part to the pressure applied through international solidarity, workers were able to mobilize for three months, making significant gains in the level of their struggle. Workers turned out in record numbers, unified in their demands. Students, vendors, and neighborhood groups stood in solidarity with workers.

Normally, workers issues and their perspective are not found in Haiti’s mainstream newspapers, websites, nor do they concern government officials. However, this recent campaign elevated the scope and scale of garment workers struggles to the point that everyone in Haiti was talking about it. Everyone had to decide: “Which side are you on?” In Haiti and beyond, thousands sided with workers.

As we previously reported, the Haitian Senate and President Jovenel Moise even felt compelled to feign support of the workers. Their posturing was shown as just that with their pathetic wage increase of 350 Gourdes.

On Monday, July 31, 2017, workers planned to gather and march from the Sonapi Industrial Park in Port Au Prince to show their rejection of Moise’s bogus wage. They were met with heavy police presence, blocking the gates. Their guns were loaded with real bullets, rather than rubber ones.

After three months of ongoing, tire-less mobilization and confrontation with bosses and increased police repression, workers have let us know it’s time to take a pause. This is not a stopping point. They will re-group, agitate and continue to organize, building on the strength gathered from this recent campaign.

Thank you again for your emails, texts, social media posts and donations. They had a major impact. Thank you for choosing to act, to resist exploitation in the production of goods we consume. Thank you for standing on the side of workers.

Below is a bulletin put out by SOTA-BO textile union in Port Au Prince, on August 3rd, addressing fellow garment workers. Please read it. (Translated from Kreyol to English).

How You Can Help

If you’re asking how you can continue to help, the best way to do so now is with financial support. As you can imagine, after three months of ongoing work stoppage, strike, marches, leafletting, the unions and workers, funds are low.
Your contribution will be to provide meals to workers at meetings; to print leaflets; to help transport organizers; and to recoup the costs of mobilizing in four locations, since May 19. 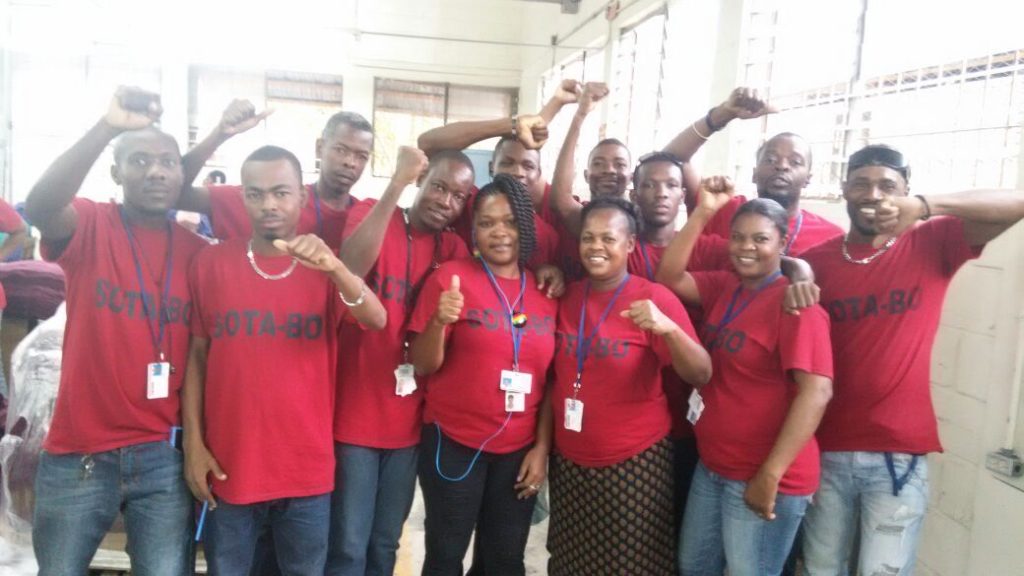 Since May First, we launched a mobilization to demand that the state set the minimum salary at 800 Gourdes (US $12.50). Now, after the draconian recommendation of the contested CSS, president Jovenel Moise adjusted the minimum salary at 350 Gourdes (US $5.47). On Monday July 31, we planned a march against the 350 Gourdes because we demanded 800 Gourdes at the least. However, our worker comrades did not come out to tell Jovenel they rejected the 350 Gourdes. This salary will not satisfy our needs. As it is, neither 335 Gourdes (US $5.23), 350 Gourdes, nor 800 Gourdes match up to what we need to take care of our families. In our viewpoint, this is not “create jobs.” This is disguised unemployment. Neither Jovenel nor the capitalists can live on such a salary. How is it that they want us, workers, who contribute so much in creating wealth agree to take in such low salary? What happened on Monday July 31? What did we see?

1)   A large contingent of policemen occupying the park with the complicity of the factory owners to stop us from taking to the streets. In front of many factories, police cars stay put to intimidate workers who wanted to come out and had trucks of skin-irritant water cannon and other vehicles full of special police units such as BIM with heavy weapons ready to kill.

2)   Some factory owners made offers to factory workers with a salary of 400 or 500 Gourdes a day and a 20% reduction in production quotas and other benefits such as food subsidies, Saturdays off and lottery to win a motorcycle to derail the workers so they keep working and not leave. Some other factory owners threatened workers with massive firings if the walk out for the protests.

3)   There is also the stress on workers emerging from the fast approaching school opening in September; they feel they have to work to save some money for their kids to return to school.

4)   There is also a level of movement fatigue in some workers. 3 months of struggle in the streets wasn’t easy for them. They didn’t get paid for the days they were out in the streets. The capitalists refuse to pay them because they say salary adjustment is not their job. The state has to do that. The struggle to adjust the minimum salary is a very important demand for the workers. It’s a union activity; if they inform MAST and the factory owners, participants in such activities should normally be paid their salaries.

We denounce the use of police to intimidate workers. To participate in Union activities is a right for all workers to defend the economic and social interests. As for the factory owners who offered to pay 400/500 Gourdes today, they should continue to give it. 350 Gourdes today is the least they can give. Therefore, they began to give 400/500 Gourdes, they should continue to give it. This is a win for all workers who got it and they should continue to get it. LET THEIR HOAX BLOW UP IN THEIR FACES! LET’S ORGANIZE IN THE FACTORIES SO THE CAPITALISTS PAY US A LIVABLE WAGE. IN ADDITION, SALARY ADJUSTMENTS INDEXED TO INFLATION ACCORDING TO THE LAW. WHERE IS JOVENEL, WHERE IS THE POLICE TO MAKE THE CAPITALISTS OBEY THE LAW?

We want to raise 2 points on the executive order published.  One, the workers lost almost a year as a result of the long delay on the part of the state in setting the minimum salary. According to the law, the minimum salary should have been adjusted since the month of October 2016. The new salary of 350 Gourdes begins on August First 2017; this represents a loss for all workers in the country. The government does not take that into account. Many workers thought that the salary of 350 Gourdes would be retroactive from May 2017 to help them make up for the 5 months in the fiscal year 2016-2017. The question now is what is being done for the fiscal year 2017-2018 with the rising inflation rate? Secondly, there is no mention of the production wage in the executive order. The 2009 Law on the minimum salary included it in articles 2, 2.1, 2.2. Therefore, the executive order violates current law. Is it why the executive order never mentioned anywhere the 2009 law? Can an executive order remove a gain already embedded in a law? SALARY ADJUSTMENT SHOULD BE IMPLEMENTED INDEXED TO RISING INFLATION ACCORDING TO THE LAW. THE GOVERNMENT VIA THE MINISTRY OF SOCIAL AFFAIRS AND LABOR SHOULD SEE TO IT THAT THE CAPITALISTS OBEY THE LAW.

True, the Monday mobilization did not materialize. However, we must send kudos to the unionized and non-unionized workers for their participation in the past 3 months of STRUGGLE. We salute the determination and engagement of more than 25,000 workers who participated in the mobilizations. We managed to bring more workers on the streets in 2017 than in 2009 when we got a raise of 200 Gourdes back then. The current mobilizations took place thanks to the sacrifices of workers, mothers and fathers on all these days. That is why we cannot allow today’s loss to cloud out the GREAT FIGHT we just put up. We earned some points in the struggle. Among them, we fought for 800 Gourdes on an independent basis under the direction of our own combative unions that defended our interests as exploited workers under great pressure and threats. We had the support and solidarity of many people and organizations nationally and internationally. Many progressive and popular organizations were side by side with us on the streets. We were able to force a public debate on our miserly salary, bad working conditions, and the bankruptcy of the social security system such as ONA and OFATMA for many months.

Even though our living conditions and our current level of social awareness today tend to derail us or slow us down in the struggle resulting in the fact that the weeklong mobilization we planned could not materialize, we proved that we can fight, we have what it takes to move forward in our struggle to change our living conditions. That is why we must work to consolidate our gains, solidify our unions that allowed us to launch the mobilizations for the minimum salary of 800 Gourdes. As many of you stated, it’s our union struggle that helped us win the 350 Gourdes because the capitalists did not want to adjust the salary at all. It’s true, 350 Gourdes is not enough; however, we got it as a result of our STRUGGLE.

We have many other immediate demands to fight for such as negotiations on the wage of tariff production, reinstatement of fired workers and unionists because of their participation in the mobilizations, removal of the 2 fake representatives in the Supreme Salary Council (CSS), implementation of the social benefits with a commission to handle this question as it should, stop parliament from voting this rotten law of 3/8, relaunch tripartite negotiations on the labor code, etc. Come to the meetings so we can draw our battle plans for the days ahead and in the future. IT’S ONLY FIGHTING ON AN ORGANIZED FASHION IN OUR INDEPENDENT UNIONS WE WILL REACH THE DEPTH OF LIFE. LET’S CONSOLIDATE OUR UNIONS. THE STRUGGLE CONTINUES WITH MORE VIGOR!