THANK YOU SO MUCH for the incredible show of solidarity for Haitian garment workers and their fight for 800 Gourdes minimum wage!

This is why police began taking and destroying workers’ phones. They are used to operating with impunity, but they know we are watching. Organizers also said, if it weren’t for RRN solidarity and pressure, police repression against the workers would be even worse.

Also, today in the Haitian newspaper, Le Nouvelliste, Association of Industries of Haiti (ADIH) president, George Sassine showed that he too is feeling the international pressure. He is one of the contacts the RRN has been emailing.

He said, “I never said I was against the minimum wage adjustment. I have never sold Haiti’s low wages. I sell the proximity and the availability to find workers and the law Hope. ”

ADIH is comprised of factory owners. They consistently market Haiti to the global textile industry with its “comparative advantages” of extremely cheap labor and proximity to the US. The Hope and Help Acts allow goods produced in Haiti to enter the US and Canada tariff-free.

ADIH also put out false claims at the start of the strike, Friday 5/19/17, claiming that striking workers were attacking factories and fellow workers. We have seen in photos and videos from workers that the violence and repression is from factory owners working to protect their profits.

Thank you to RRN members from Haiti, Dominican Republic, Brasil, France, the US, Canada, and all over the globe!

BIG thanks to everyone who has made a financial contribution to the workers’ solidarity strike fund.

Maybe it’s your college or team t-shirt, your running shorts, or a cheesy polo with the company logo that your job likes everyone to where on Fridays… somewhere in your wardrobe, there is likely an article of Gildan brand clothing.

In 2015 Gildan generated $2.57 billion in revenue, an increase of 11.7% from 2014, thanks to the exploited labor of garment workers in Haiti, Honduras, Mexico, and Nicaragua.

Click here for info to Call Gildan NOW.
Let them know you stand with Haitian garment workers and their demand – 800 Gourdes! 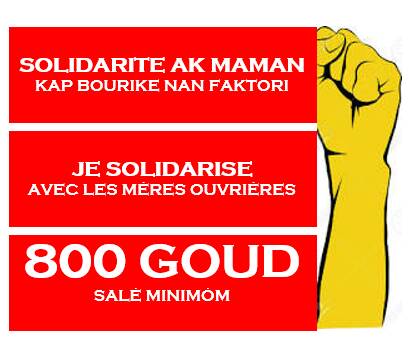 We are waiting to hear from the workers what comes next. The president of Haiti, Jovenel Moise, made a statement that he had no intention to adjust the minimum wage. Workers have been striking for over 10 days. There may be a pause in mobilization for rest and to recoup, but the struggle will most definitely continue. They are determined.

In the audio below, workers sing, “Jovenel, we have the right to 800!”

Be sure to Call Gildan Today! Tell them to pay workers 800 Gourdes.

Last, please make a financial contribution to help these workers continue their fight.

Workers are determined to continue with the ongoing strikes. They are fierce and brave, but they are also hungry, and funds to continue the strike are low.

Skip a few cups of coffee or a dinner out, and donate that money to Haitian garment workers.

ABA EKSPLWATASYON! DOWN WITH EXPLOITATION!