Yesterday we reported about the ongoing strike at H&H Textiles in Carrefour, Haiti, led by the union SOTA-BO. (Click here to read that past update for more info.)

Workers are rightfully fed up. They struggle to exist on misery wages, and are constantly harassed, intimidated and physically attacked for asserting their right to organize.

For the past several days, the factory has been shut down due to the strike, and workers have been locked out.

Late Wednesday, Minister of Social Affairs, Roosevelt Bellevue, came to H&H Textiles factory. He spent a lot of time with management, and did not bother to hear the workers’ grievances.

Instead, he announced to them that the factory would open the following day (Thurs, 4/13/17), and that whoever wanted to enter to go to work would be free to enter. For everyone else who does not return to work, measures will be taken. He announced that the police would be present.

The workers agreed that they are determined to continue the strike.

SOTA-BO & H&H workers continue the strike and demonstration outside the factory.

Roosevelt Bellevue, Minister of Social Affairs attempted to speak to the workers and to convince them to give up, let go of their demands, and return to their miserable work conditions.

In the video below Roosevelt Bellevue says, “The bosses need you and you need the bosses.” In response, a worker shouts, “The boss only needs our labor power!” Meaning, the bosses could care less about us, they only want us to exploit us.

The below leaflet was also circulated and given to the minister of social affairs. It reads, “We do not want Khan. She must go!” 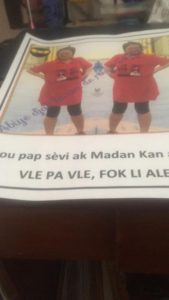 No agreement was reached and the strike continues on.

Workers will likely face sever repression from the police and/or CIMO, the Haitian equivalent to the SWAT team.

These workers are determined, fierce and brave.  But, they are also hungry, and funds to continue the strike are low.

Here are ways you can help:

3. Email the RRN if you’re in the Miami/Ft. Lauderdale area, and you’d like to send cash to be wired to Haiti – RRNsolidarity@gmail.com.

Previous Post: SOTA/H&H Textile Workers Strike. Which Side Are You On?
Next Post: Strike Fund for May Day!