In January, SOTA-BO textile workers union at H&H Textiles in Carrefour, Haiti were ready to strike to force management to re-hire five women workers & union members who were unjustly fired. To avoid a work stoppage, H&H rehired three of the five workers.

At the H&H factory, workers and union members constantly face arbitrary firings, intimidation, and unwarranted disciplinary measures. Workers are not allowed to bring their phones into the factory floor. And a particular production manager, Mrs. Khan, is known to be especially brutal with the workers. She will headbutt workers to assert her dominance over them.

Last week, the workers of H&H said, “Enough!” They are demanding that Mrs. Khan and her brutal ways go home! They have also joined garment workers in the Ouanaminthe who are demanding an increased minimum wage from 350 Gourdes ($5.15 US) to 800 per day ($11.57 US).

On Wed 4/5, the RRN received word of a strike underway at H&H Textiles. Since then, the struggle has intensified.

Here is a time line of events, followed by more basic info of the entities involved:

Wed 4/5 – SOTA textile union leads a strike and march demanding and chanting that “Mrs. Khan has to go!”

Thurs 4/6 – H&H management locks workers out of the factory gates. They continue to protest outside the gates. 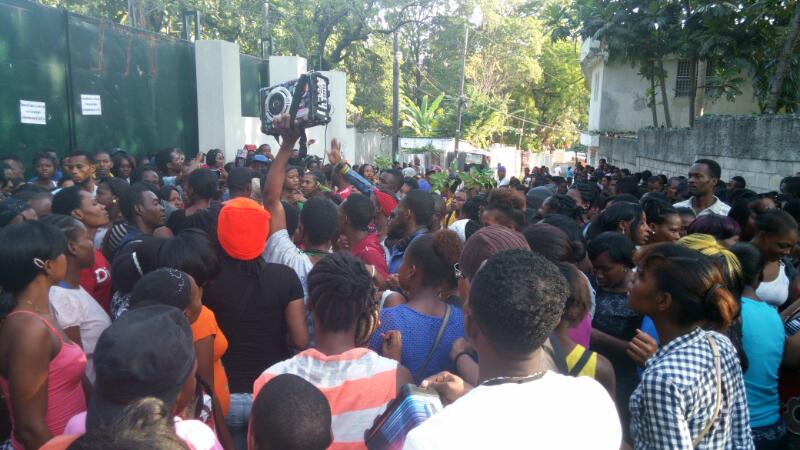 Mon 4/10 – Workers continue the strike and mobilize again outside the factory gates. CIMO, the Haitian equivalent of a SWAT team comes to threaten the workers, but there was no clash between CIMO and the strikers.

In the video below, the workers sing a song they wrote, “We will never give up on this fight. The future belongs to us workers.”

Eventually some of the workers were able to get in through the gate.

Tues 4/11 – H&H workers confront Mrs. Khan. They block her vehicle as she attempts to leave the factory complex. 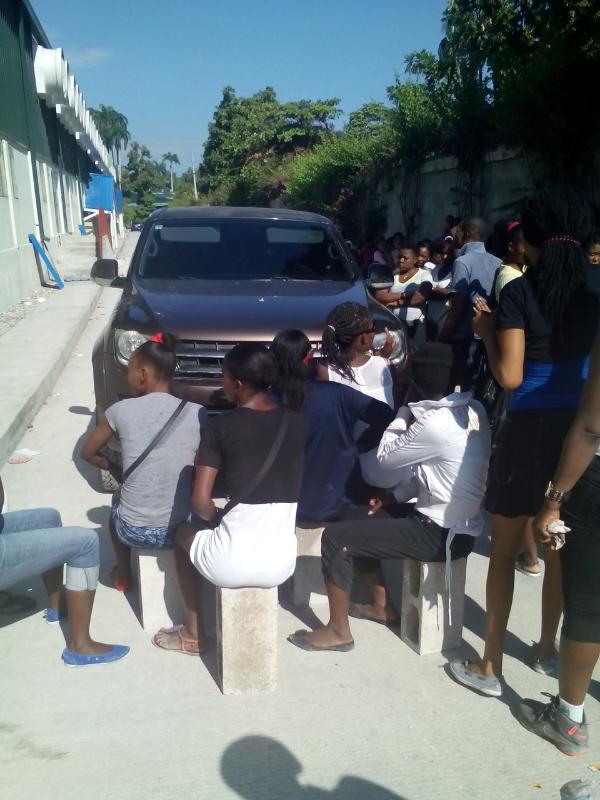 In the video below, the woman says, “We are in front of the gate… no one should try to pacify us. The time has come.”

At 1pm the same day, the Ministry of Social Affairs met with workers and SOTA members. We have not received a report as to the outcome of this meeting.

At this point, most of the striking workers have not had a decent meal.

Wed 4/12 – At some point in the morning, the gates of H&H factory were burned.

Some will denounce this action because it is violent. This is violence to a piece of property. And yet a gate, a shop window, a piece of machinery is often given more value than the lives of textile workers who face violence and brutality every day. The misery wages they receive are a form a violence. Factory owners, corporate CEO’s and shareholders make millions of dollars, while workers – the very people who produce the goods – cannot afford the most basic essentials of life – food, clean water, housing, clothing, and education. These companies move entire operations across the globe in search of the absolute lowest wage, the most exploitative situations. Factory owners make sure that workers who try to fight for their rights to organize are repressed, harassed and often outright beaten.

So if we speak of violence, it’s important to look at the larger context. The clothing we wear is produced, every day, through violence and exploitation. Imagine yourself, for a moment, as the textile worker, rather than the consumer. If at every turn, your attempt to assert your basic rights was violently repressed, how would you respond? In this context, does a burnt piece of metal really seem out of line?

The act of striking is incredibly brave. It requires a serious sacrifice, and a level of cooperation and care for their collective interest.  Striking means no wages.  It means hungry families, no money for public transit to get to school or to the market.  It means the rent will not be paid and the possibility of homelessness.  And yet, the textile workers continue on… because they recognize that the only path to justice is through their collective fight.  It’s their only alternative to starvation wages and further exploitation.

Which Side Are You On?

At the same time that SOTA & H&H workers are striking in Carrefour, SOKOWA and garment workers in the north of Haiti, in Ouanaminthe, are also striking against attempts to take a 10 percent tax from their misery wages. Tomorrow, we will have an update for you on another battle taking place at the Quality Sewing factory in Port Au Prince. Here, a new chapter of SOTA is facing severe repression.

We expect that Haitian textile workers will be requesting our solidarity soon. For now, they ask that we spread the word about their fights, and that we decide, which side are we on.

Below is a basic run down of the who, what, why & how of this struggle. Please read it to understand the players and for ways to keep in touch.

H&H Textiles – the Haiti subsidiary of Seoul, Korea based Yujin Apparel.  Their factory is in Carrefour, just south of Port Au Prince in Haiti. They produce mostly t-shirts, shorts, and sportswear.  Some brands include Children’s Place, Avia, and Athletic Works. You’ll find these brands in stores like Target, Walmart and Marshall’s.

Mrs. Khan – a production manager at H&H Textiles who is especially brutal with workers. She physically attacks workers, shows them no respect, and has even head butted workers to try to assert her dominance over them. The workers are calling for her to be fired.

WHAT: (Based on a conversation with a BO representative)

Reductions: H&H consistently threatens workers with “reductions,” saying they’re going to be firing people to make the operation more profitable. The reality is that reductions are meant to intimidate people, to make them think that their job is not secure, and thereby discourage them from exercising their right to organize.

Disciplinary Measures: H&H justifies their anti-union firings by documenting every minute and arbitrary action of workers. Workers have to sign letters, admitting their guilt or error constantly. If you are late, you must sign a letter. If a boss thinks you spoke to a fellow worker too long, they write you up, and you must sign a letter. Then these letters are used to justify anti-union suspensions and firings. “Well look, you have four letters here.” Workers need these jobs. With their salaries, they live in debt, on the edge of desperation. But without the salary, starvation and homelessness are the reality.

Phone Policy: H&H has implemented a policy that bans workers from bringing their cell phones into the factory. These workers have families that depend on them. A phone call is the only method of communication if something happens with a child or family member. It’s yet another disrespectful policing of workers and stripping them of basic rights.

STRIKE! Workers are fed up. Every day is a fight to exist. Most work 12-16 hour days. They receive starvation wages, while factory owners, brands and stores make millions, sometimes billions of dollars in profit. They have the legal right to a union and the right to organize. But at every turn, this right is suppressed. Now, they are taking matters into their own hands.

The fight for a higher wage in Haiti is ongoing.  This fight, as well as the basic right to organize, is constantly met with harassment, illegal firings, and often violent repression.  Manufacturers and the brands they produce for vehemently oppose workers’ rights because they interfere with their ability to extract as much profit out of the production process as possible.  This means exploitation is required, and it takes many forms.  Setting impossible production quotas to prevent workers from receiving the minimum wage, wage theft, and unpaid overtime are a few of these methods.

Here’s how you can support these workers, for now. We’ll keep you posted if they decide the situation requires more direct action.

Find out about workers’ struggles in your own community.

Click here to read further updates on this fight.