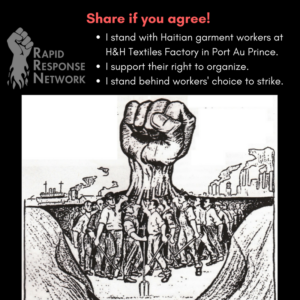 Port Au Prince, Haiti – Wednesday 1/25/17 – Garment workers and SOTA-BO union members at H&H Textiles factory warned the company they planned to go on strike today, Thursday 1/26. H&H Textiles is in the Palmiers Free Zone, of the Carrefour subdivision in Port-au-Prince.

After learning of the planned strike, H&H agreed to hire back three of the four workers they unjustly fired.* They returned workers’ badges to them, meaning they can access the factory to return to work.

This is a partial victory.

SOTA-BO is waiting to see what the company does next, and they may call on the RRN for our international solidarity.

The company has not changed their ways.  They continue to intimidate workers. They consistently try to eliminate workers fighting for their rights to a decent wage and their right to organize.

Below is a rundown of what you need to know about the situation, followed by the original statement from SOTA-BO about their intended strike.

* Update (1/30/17) We originally reported that four women workers were fired. There was a fifth worker, but we did not receive a report on the circumstance of her firing.

H&H Textile – the Haiti subsidiary of Seoul, Korea based Yujin Apparel.  Their factory in Haiti makes mostly t-shirts, shorts, and sportswear.  Some brands include Children’s Place, Avia, and Athletic Works. You’ll find these brands in stores like Walmart and Marshall’s.

What:  (Based on a conversation with a BO representative)

The fight for a higher wage (500 Gourdes) in Haiti is ongoing.  This fight, as well as the basic right to organize, is constantly met with harassment, illegal firings, and often violent repression.  Manufacturers and the brands they produce for vehemently oppose workers’ rights because they interfere with their ability to extract as much profit out of the production process as possible.  This means exploitation is required, and it takes many forms.  Setting impossible production quotas to prevent workers from receiving the minimum wage, wage theft, and unpaid overtime are a few of these methods.

Here’s how you can support these workers, for now. We’ll keep you posted if they decide the situation requires more direct action.

Workers, at H&H Textiles, the Executive Secretariat of SOTA-BO and the H&H Textiles Committee Section send their greetings and tipping hats to you all for your growing awareness on the importance of the SOTA-BO Union in the face of the intimidation and corruption attempts by company management and allies to destroy our union.

Comrades, beginning with the end of the year 2016, we’ve taken some hard hits. For the last few weeks, it’s been worse. We’ve been through four (4) arbitrary firings, and many dismissals to intimidate our members for their involvement in union activities and to scare workers so they don’t fight against exploitation, oppression and domination in the plants. They want to pacify us to force us to obey as puppets. HELL NO ! THIS CANNOT BE DONE, WE WILL NOT LET THAT HAPPEN ! Let’s mobilize to make January 26 strong ! Let’s  build solidarity with one another, we are organizing to make SOTA-BO strong because those capitalists are not playing with us, they use all tactics to destroy our union with arbitrary disciplinary measures and abusive power or with attempts to corrupt some of us to give up the fight. Let’s tell them, THEY ARE DREAMING ! WE WILL NOT BE DECEIVED ! We will mobilize on Thursday January 26, 2017 to demand :

We are mobilizing to give them their true worth. We are moving forward in the struggle against all imperialists and the Haitian puppets managing the plants. WE WILL NOT OBEY ! Tell each other, THE FIGHT SHALL CONTINUE STRONGER. WE SAY : WORK STOPPAGE FOR JANUARY 26, 2017. WE ARE MOBILIZING TO THROW THEM IN THE AIR WITHOUT CATCHING THEM ON THEIR WAY DOWN !