BIG thanks to everyone who’s participated in solidarity efforts to stand with Haitian union organizers who have been illegally fired!

We have some updates on your recent efforts. 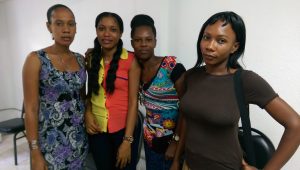 H&H Textiles:  For the last two weeks, RRN supporters emailed and took selfies to stand with H&H Textiles workers.  Last Thursday, 8/4, management at H&H finally met with SOTA union to discuss the firings.  We’re still waiting for a full update from Haiti on the results of this meeting.  But, you’ll be happy to know that H&H management and the negotiation team mentioned the pressure they felt from the RRN.  They said it really wasn’t good for their PR image. How about paying people a decent wage and respecting their rights for a good PR image? 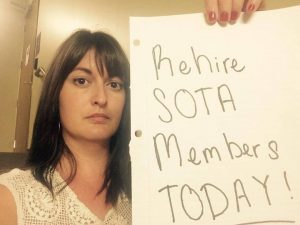 Premium Apparel:  In May, garment workers and SOTA union organizers held a strike and shut down the entire Sonapi Industrial Park in Port Au Prince to demand a minimum wage of 500 Gourds.  Two SOTA organizers – Telemarque Pierre & Felixone Clerger – were illegally fired from their jobs at Premium Apparel, owned by Clifford Apaid. So many of you emailed, tweeted and called Apaid to demand their rehiring. GOOD NEWS. This past Monday, 8/8,  Telemarque & Felixone returned to work at Premium Apparel.  Labor mediators found that the firing was illegal. Now the workers are fighting for the pay they are owed for the months they were out of work. 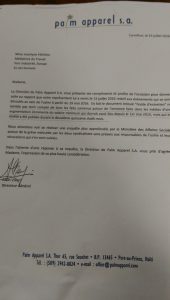 Palm Apparel: We’re waiting for more details on this situation, but SOTA organizers working at Palm Apparel were illegally fired, once again, for exercising their right to organize.  A labor mediator found the firings to be without ground and recommended that the workers get their jobs back.  Then, SOTA received a letter from Palm owner, Alain Villard, saying that rather than hire the workers back, he wanted another round of inquiry. One of these fired Palm workers reported that owner, Alain Villard, told them he’d rather spend money on his dogs than pay them more in wages.  Stay tuned for solidarity efforts to fight back against this kind of blatant exploitation and disregard for workers & human rights.

Once again, THANK YOU FOR ALL YOU DO.

The struggle for wages and the right to organize continues. Your solidarity is such an important element of this fight.